An Ant
Muurahainen
Film by Kimmo Alakunnas
Synopsis of the film:
An Ant is a short contemporary dance film which tells the story of a workaholic Man whose sense of reality begins to fail. Because of his actions, his Co-worker falls into imaginary worlds from which it is almost impossible to escape. What is real and what is fantasy? And what, exactly, is the enigmatic Ant which keeps disturbing the main characters?
The film deals with the disability to give and receive love, and the way we give it doesn’t feel right. If we don’t understand right from wrong, we take what we want by force. An Ant uses dance and movement as an element that leads the audience along. There are no spoken lines, so the viewer has more freedom to interpret the events of the film. It is a collaboration of film- and dance art. 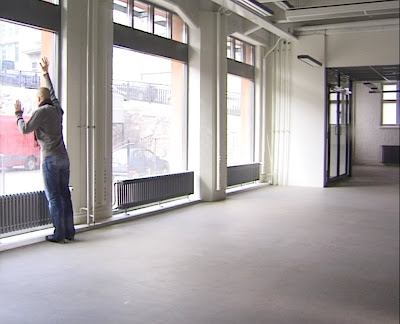 Synopsis of the film:
A man with unconventional moves wakes up at home in the morning and faces a problem: There's no more coffee. While going out to get some coffee he gets caught up in a new set of problems, getting lost being one of the most surprising ones. Is the empty, unknown hall into which he stumbles real or just a product of his imagination? In his distress the man encounters an unexpected friendship that helps him back towards freedom. The film is a tale about the connection between a man and a mouse as well as the joys and sorrows of loneliness and friendship. Freedom awaits as long as you are able to wait patiently and have an open mind.
The topics of the film are forcing one to stop for a while and see where they are going. Are they lost or found? When we get lost to our daily routines, which will bring us back? In the  movie a mouse safes the man from loneliness and they have each others in the end. Mus Musculus uses dance and movement as an element that leads the audience along.